The Polar Bear, the Penguin and the Eagle 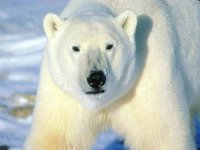 The Eagle will be taken off of the Endangered Species List. It is well overdue. There are eagles everwhere. There was even a famous eagle melodrama at the Woodrow Wilson Bridge replacement construction site south of Washington, DC. The delisting was first proposed during the Clinton administration but they just didn't want to do it. Probably for political reasons.

Conversely, global warming is threatening the polar bear by destroying its sea ice habitat in the Arctic region. The Bush administration is proposing to list the polar bear as a threatened species under the Endangered Species Act (ESA). The ESA is administered by the U.S. Fish & Wildlife Service (FWS) in the Department of Interior. Interior Secretary Dirk Kempthorne announced the proposal at a press conference in Washington, DC. Probably not good news to the average Arctic seal, but evidently they are not threatened . Although not proposed to be listed as threatened or endangered, the penguin, according to some reports and studies is also threatened by the deicing of the Arctic.
Posted by Norris McDonald at 8:38 PM