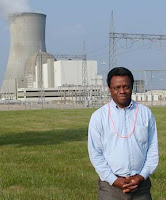 Center President Norris McDonald participated in the Oct 30 meeting between the U.S. Nuclear Regulatory Commission (NRC) and companies applying for new licenses (called 'Combined Operating Licenses) to build nuclear power plants. The companies include Ameren, Constellation, French firms Areva and Electricity de France. Those companies, excluding Ameren, comprise a consortium called 'Unistar.' Other members include Bechtel, Alstrom and Accenture. The all day meeting was held at NRC's Rockville, Maryland headquarters.
The NRC gave a presentation on the European Pressurized Reactor (also called Evolutionary Power Reactor) and the Combined Operating License Review Status for the following proposed plant site locations: Nine Mile Point (NY), Bell Bend (PA), Callaway (MO) and Calvert Cliffs (MD). McDonald has visited each site except for Bell Bend. Unistar provided a detailed powerpoint presentation and handout for the meeting.
McDonald asked about the status of the ownership of the Constellation Energy Group. Although it has been publicly announced that Warren Buffet's company is purchasing Constellation, France's Electricite de France/Areva are challenging the purchase along with Constellation stockholders because of their higher bid for the company. He also asked about the implications of possibly having to build cooling towers under Section 316(b) of the Clean Water Act. The Center is supporting the purchase by the French firm because we are more confident in their motivation to build. 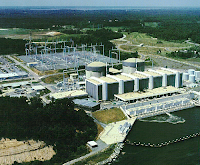 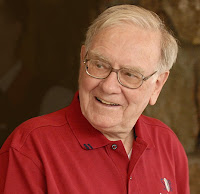 We oppose the pending purchase of Constellation Energy Group by MidAmerican Energy Holding Co/Berkshire Hathaway, Inc (Warren Buffet) . We oppose it because we believe the purchase could lead to the closure of Calvert Cliffs nuclear power plant. Our assessment is that Mr. Buffet will not build a new nuclear plant at the site. Warren Buffet decided against building a reactor in Idaho due to economic reasons and we believe he would make the same decision in Maryland. The plant would cost more than he is proposing to pay for the company. Although the consortium called Unistar, of which Constellation is the lead company, is proceeding with licensing and reactor certification plans at the Nuclear Regulatory Commission, it is probably more for Constellation's Nine Mile Point proposal for a new reactor than Calvert Cliffs.
Another potential problem is the cooling water intake structure (CWIS) issue. Without getting into too many of the details, the Environmental Protection Agency (EPA) could rule that plants such as Calvert Cliffs are required to build cooling towers as 'best technology available.' We are certain that Mr. Buffet would not make such an investment and if required to do it, he would probably close the facility. This would be a tragic loss to air quality in Maryland and to the global fight to mitigate global warming.
We support the Electricite de France/Kohlberg Kravis Roberts & Company (KKR) purchase of Constellation because we believe they would build the new plant and build cooling towers if required to do so. The motivation is to get a foothold into the American market with their new reactor design. Moreover, their bid for Constellation was higher than Mr. Buffet's bid and there is stockholder litigation to take the higher priced stock offer. For the reasons listed above, we encourage the Constellation board of directors and the stockholders to reject Mr. Buffet's offer and accept EdF's offer.
Plans for 3rd Reactor at Calvert Cliffs Probably Dead
Plans for 3rd Reactor at Calvert Cliffs Looking Better
Posted by Norris McDonald at 1:49 PM No comments:

Shandong Haihua Co Ltd has been taken over by China National Offshore Oil Corp refinery unit (CNOOC). The deal is subject to regulatory approval. Shandong Haihua Group produces soda, ethyl acetate, methylene chloride and potassium sulfate. They are based in the eastern province of Shandong.

Shandong Haihua Group had signed a memorandum of understanding to set up a joint venture with US buyout firm Carlyle in June last year. The deal fell through due to a failure to reach agreement on major issues. This was one month after our Center visited Shandong Haihua Group and they requested us to find a buyer.

Source: Forbes
Posted by Norris McDonald at 4:05 PM No comments:

The price of the benchmark steel product, hot-rolled steel, is $780 a metric ton on global markets. That is down from $1,000 a metric ton earlier this year but still above the $650 it costs for most steelmakers to make a metric ton of steel. (The Wall Street Journal, 10/8/08)
Posted by Norris McDonald at 8:36 PM No comments: 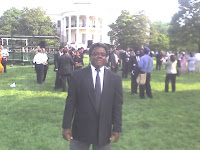 The U.S. Congress on October 1, 2008, gave final approval to an H.R. 7081 United States-India Nuclear Cooperation Approval and Nonproliferation Enhancement Act, which facilitates nuclear cooperation between the United States and India [House Vote]. This bill passed in the House of Representatives by roll call vote on Sep 27. The vote was held under a suspension of the rules to cut debate short and pass the bill, needing a two-thirds majority. The totals were 298 Ayes, 117 Nays, 18 Present/Not Voting. This bill passed in the Senate by roll call vote on Oct 1. The totals were 86 Ayes, 13 Nays, 1 Present/Not Voting. President Bush signed the bill into law on October 8, a week after the bill was ratified by the U.S. Congress.

It provides U.S. assistance to India's civilian nuclear energy program, and expands U.S.-India cooperation in energy and satellite technology. Although India is not a signatory to the Nuclear Nonproliferation Treaty (NPT), India has maintained strict controls on its nuclear technology and has not shared it with any other country. Under the U.S. Atomic Energy Act, which regulates the trade of nuclear material, congressional approval was needed to pass the exemptions to U.S. laws required for the nuclear deal to be implemented. Article I of the treaty says nations that possess nuclear weapons agree not to help states that do not possess weapons to acquire them. In 1968, India refused to sign the NPT, claiming it was biased. In 1974, India tested its first nuclear bomb, showing it could develop nuclear weapons with technology transferred for peaceful purposes. As a result, the United States isolated India for twenty-five years, refusing nuclear cooperation and trying to convince other countries to do the same.

The details of the deal include the following:

India agrees to allow inspectors from the International Atomic Energy Association (IAEA), the United Nations' nuclear watchdog group, access to its civilian nuclear program. By March 2006, India promised to place 14 of its 22 power reactors under IAEA safeguards permanently. India has promised that all future civilian thermal and breeder reactors shall be placed under IAEA safeguards permanently. India retains the sole right to determine such reactors as civilian, which means that India will not be constrained in any way in building future nuclear facilities, whether civilian or military. Military facilities-and stockpiles of nuclear fuel that India has produced up to now-will be exempt from inspections or safeguards.

India agrees to continue its moratorium on nuclear weapons testing.

India agrees to prevent the spread of enrichment and reprocessing technologies to states that don't possess them and to support international nonproliferation efforts.

U.S. companies will be allowed to build nuclear reactors in India and provide nuclear fuel for its civilian energy program. (An approval by the Nuclear Suppliers Group lifting the ban on India has also cleared the way for other countries to make nuclear fuel and technology sales to India.)

Source: Council on Foreign Relations
Posted by Norris McDonald at 4:16 PM No comments:

Purchase of up to $700 billion in troubled Mortgage Backed Securities 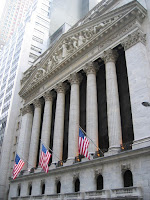 Creation of several layers of oversight

An increase in Federal Deposit Insurance Corporation coverage of bank deposits from $100,000 to $250,000, as well as extensions of tax credits [see below] and a freeze on the expansion of the Alternative Minimum Tax added an extra $140 billion to the original $700 billion price tag.
They put the Senate version of the renewables tax package, which includes wind, solar and plug-in electric cars, in the bill (H.R. 7060). Efforts to take away tax benefits from oil and gas companies and use them as offsets for renewables have repeatedly failed.