The Bush administration dropped its support for a $1.8 billion planned 275-megawatt coal-fired plant power plant designed to store greenhouse gases underground, because of ballooning costs. This decision comes about a month after the private partners in the project picked Mattoon, Illinois as the site for the project. Congress appropriated $108 million for the plant that was authorized by the Energy Policy Act of 2005, but the cost of the project has doubled and other technologies could be better. The Center would like to see a conversion plant that converts carbon dioxide into gasoline. FutureGen is one of the most advanced projects for determining whether emissions of carbon dioxide, a greenhouse gas, can be captured from coal-fired plants and stored, or sequestered, underground. The Center will examine whether CO2 to gasoline conversion qualifies for the FutureGen project. By contrast, the FutureGen project is a nonprofit venture that included 13 utilities and coal companies constructing of a plant that would turn coal to gas, strip out and store underground the carbon dioxide that contributes to climate change, and then burn the remaining gas to produce electricity and hydrogen.

The project is a joint venture between a private industry alliance, which would cover 26 percent of the cost and the Department of Energy, which was supposed to cover 74 percent. Half of the nation's electricity is produced by coal-fired plants so dealing with the carbon dioxide for is important for reducing this main greenhouse gas emission that is producing climate change. The cost was first estimated in 2004 at $950 million and the $1.8 billion final cost estimate assumed that construction costs escalate at a 5.2 percent annual rate. DOE has refused to issue a record of decision on the environmental impact statement, which blocks development of the project. DOE has decided to pay the cost of adding carbon capture and storage technology to new or existing coal plants bigger than 300 megawatts. (The Washington Post) (The Washington Post)
Posted by Norris McDonald at 11:05 AM No comments:

China-born Ellis Yan, right, 53, owns Shanghai, China-based TCP Inc, the largest manufacturer of compact fluorescent light (CFL) bulbs sold in the U.S. About 200 million CFL bulbs were sold in 2006 and TCP provided 70% of those bulbs. GE and Sylvania are gearing up to compete with TCP and currently resell TCP bulbs under their names. TCP is currently the main supplier of CFLs to Home Depot and Wal-Mart. TCP has 3,000 employees.
Two big events have helped in the advancement of CFLs. One was the electricity crisis in California in 2001, which led to a huge conservation push that included replacing light bulbs. Second is the Energy Security and Independence Act of 2007, which phases out traditional incandescent light bulbs by 2012. Mercury is a concern in CFLs. About five milligrams of mercury are used in the typical bulb. A tiny amount of mercury is heated until it turns into gas that reacts with other gases to produce light. Mercury is toxic. (The Wall Street Journal, 12/27/07)
Posted by Norris McDonald at 12:01 AM No comments:

The European Union plans to establish firm caps on emissions by 27 countries designed to reduce greenhouse gas emissions to 20 % below 1990 levels between 2013 and 2020. The reduction would be increased to 30 % if the United States and China signed binding climate change agreements. Of course this will not happen. This plan will auction 60 percent of the emissions permits initially and all of them by 2020. The previous cap-and-trade system did not auction credits. At least 20 % of E.U. energy has to be derived from renewable sources, including 10 percent from biofuels. The measures are similar to provisions to the Lieberman/Warner cap-and-trade bill, which would mandate a reduction by 2020 of about 20 percent below greenhouse gas emissions in 2005. The E.U. plan must still be approved by the European Parliament.

The Bush administration is hosting a second meeting of large economies this month in Honolulu, Hawaii to discuss initiatives on global warming. The administration also participated in the "Bali Roadmap" meeting organized by the United Nations Convention on Climate Change (UNFCCC) in December 2007 that is negotiating a new, post Kyoto Protocol (ends 2012) climate change agreement by 2009. The Energy Security and Independence Act of 2007 is projected to eliminate 6 billion metric tons of greenhouse gases because it raised auto fuel efficiency to 35 mpg. The U.S. and the E.U. have also proposed to the WTO to eliminate tariff and non-tariff trade barriers to clean technologies and services. The administration is working with Australia, India and China via the Asia-Pacific Partnership to promote technologies to reduce global warming.
Posted by Norris McDonald at 5:14 PM No comments:

Will Small Cars Sell To Save Money, Gasoline & Environment? 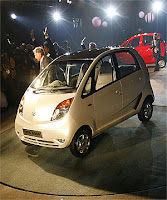 Tata Motors of India has introduced its new mini car, the Nano, left. It costs only $2,500. The car was created by Ratan Tata for the Tata Group. The four door vehicle can seat five people.
Mercedes-Benz has the Smart Fortwo micro car, right, which is now available in the United States. You see many of them in Paris already. The question is: Will Americans buy these very small cars in large numbers? (See SmartUSA)
Posted by Norris McDonald at 6:38 PM No comments: 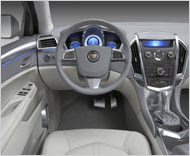 General Motors has developed the first zero-emission luxury car, the hydrogen- and battery-powered Cadillac concept car designed to run up to 100 miles per hour while emitting only water vapor. It is called the Cadillac Provoq (pronounced "provoke"). GM is now promoting the Chevrolet Volt, a plug-in hybrid and the Provoq. GM wants the Volt to be available by 2010. The Provoq has a 300-mile range.
Posted by Norris McDonald at 12:57 PM No comments:

Walter Coles owns property in Chatham, Virginia in Pittsylvania County where he wants to mine uranium on a 200-acre site. Obviously the state and local residents are afraid that such mining could release radioactive material that could contaminate the area's land, air and source of drinking water. It is being estimated that there is approximately 110 million pounds of uranium located on the site that would be worth about $10 billion at today's uranium prices.
Virginia banned uranium mining in 1982. Virginia Uranium, owned by Mr. Coles is trying to persuade the General Assembly to approve a $1 million study that will explore whether uranium can be safely mined in Virginia. Virginia Uranium has already been granted a state permit to drill 40 holes to examine the material. The two uranium deposits found at the site begin at the ground's surface and run about 800 feet deep. The Center will withhold a decision on this project until the study is completed, but our preliminary assessment is that this does not look like it is a project we can support. (The Washington Post)
Posted by Norris McDonald at 10:18 AM No comments: