Dr. Yujie Dong is the Director of the High Temperature Reactor Design Division, Institute of Nuclear and New Energy Technology (INET) at Tsinghua University, Beijing, China. Dr. Dong is leading the development team for the Pebble Bed Modular Reactor (PBMR). His team has built a functioning PBMR research reactor about 40 miles Northwest of Beijing near the Great Wall. The team is currently in the process of constructing a commercial PBMR near Weifang, China.

Data centers require huge loads of electricity to maintain climatic conditions and run the servers carrying out billions of electronic transactions every day. With Apple’s solar farm, customers could now be confident that downloading an app or video-chatting a friend would not increase carbon pollution.

The 55,000 solar panels tracking the course of the sun from a 400,000 square meter field across the road from Apple’s data center in Maiden, North Carolina were not in the picture seven years ago when Duke Energy and local government officials sought to entice Apple to open up a data center in North Carolina.  (Grist, 7/28/2014)
Posted by Norris McDonald at 1:51 PM No comments:

The United States Department of Energy (DOE) is preparing an environmental impact statement (EIS) to evaluate potential environmental impacts associated with the proposed Champlain Hudson Power Express (CHPE) transmission line between the U.S. and Canada.  DOE has a web site that is designed to provide up-to-date EIS-related information to the public and other interested parties. 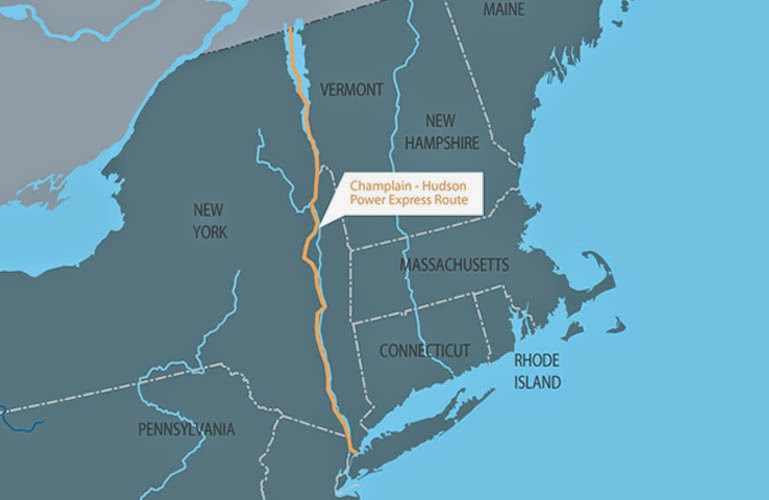 DOE has determined an EIS to be the proper National Environmental Policy Act of 1969 (NEPA) compliance document. The EIS will only address potential impacts in the United States; NEPA does not require an analysis of environmental impacts that occur within Canada. The EIS, however, will evaluate all relevant environmental impacts within the U.S. related to or caused by project-related activities in Canada. (DOE)

Posted by Norris McDonald at 1:20 PM No comments:

The U.S. Department of Transportation (DOT) is proposing to phase out thousands of railroad tank cars that carry crude oil within two years once it adopts proposed rules to upgrade safety for trains carrying flammable liquids.  Tens of thousands of these older tank cars, known as DOT-111s, will have to be replaced or retrofitted under the proposed rules.


The proposals come after a string of explosive derailments involving trains filled with oil from the Bakken Shale and will change how flammable liquids are transported in North America.  The rapidly growing amount of crude oil moving on the nation's railroads has sparked protest and concerns by local fire chiefs, who worry they aren't prepared for a catastrophic crash.  Railroads, oil companies and railcar owners have been expecting new U.S. regulations meant to improve the safety of oil shipments in the wake of several fiery train accidents. A year ago, a train full of oil from North Dakota exploded in a rural Quebec town, killing 47 people.  The federal government has also reported that crude oil from North Dakota's Bakken Shale is volatile and contains large levels of combustible gases.

Crude-carrying tank cars would need to upgraded by 2017. The proposed regulations would also give the ethanol industry until 2018 to improve or replace tank cars that carry that fuel. The deadline for cars used to transport other flammable liquids that typically pose less of a hazard than oil or ethanol would extend to 2020.
Other new requirements proposed include a 40-mile-per-hour speed limit until sturdier tank cars can be built or existing railcars can be strengthened, as well as other rules that cover tank-car design, routing, brakes and testing of hazardous liquids.


The proposed rules must be posted for 60 days to give the public, rail industry and other parties a chance to comment. The final rule is expected to become effective early next year. The rules also call for the rail industry to design routes based on safety and security factors.

The proposed requirements would apply to any train with 20 or more tank cars of oil, ethanol or a comparable fuel to be categorized as a "high-hazard flammable train" and subject to the new rules. It has become common for dedicated oil trains consisting of 100 or more railcars filled with crude to operate as a pipeline on wheels.


DOT will ask for comment from industry and emergency-response officials on railcar design. The rules lay out several options, including improved brakes and thicker, 9/16th-inch steel walls on tank cars. The new design would cover all cars built after October 2015. Existing cars would need to be retrofitted, retired or used to carry less flammable liquids. 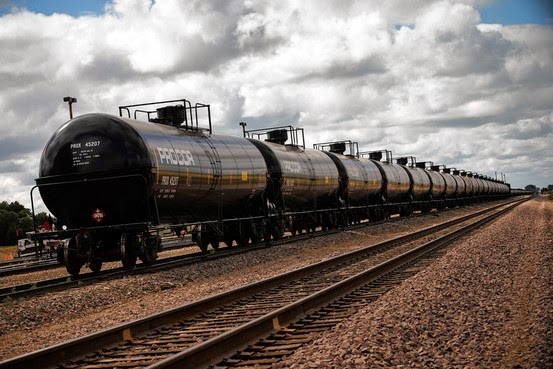 There are about 80,000 DOT-111 railcars built before 2011 that transport oil, ethanol and other flammable liquids and another 23,000 built in recent years with more crash-resistant features, according to the Railway Supply Institute's latest estimate.


The proposed rules leave open whether the 40-mph limit for high-hazard trains would only apply in certain urban areas. Trains with upgraded tank cars would be allowed to travel at 50 mph. Some experts had advocated for limiting oil trains to speeds of 30 mph or lower, but rail executives warned such a move could snarl the entire country's freight system.  (WSJ, 7/23/2-014)
Posted by Norris McDonald at 2:24 AM No comments:

The Environmental Defense Fund and Google's Earth Outreach program are going to map natural gas leaks in Boston, Indianapolis and New York's State Island. The interactive maps are the first step of a pilot project to use Google's Street View cars to measure environmental indicators. EDF says it worked with utilities to validate the findings.

The American Gas Association (AGA) notes that only a small fraction of natural gas leaks come from local utility pipelines.  AGA also notes that utilities have lowered emissions by 22% since 1990. AGA says that  in their attempt to raise the awareness of natural gas emissions, the EDF campaign understates that utilities are working with state and local policymakers to effectively reduce emissions by adopting innovative rate mechanisms to upgrade, replace and modernize natural gas distribution pipelines for safety and economic reasons.  (Frank Maisano)
Posted by Norris McDonald at 12:56 AM No comments: