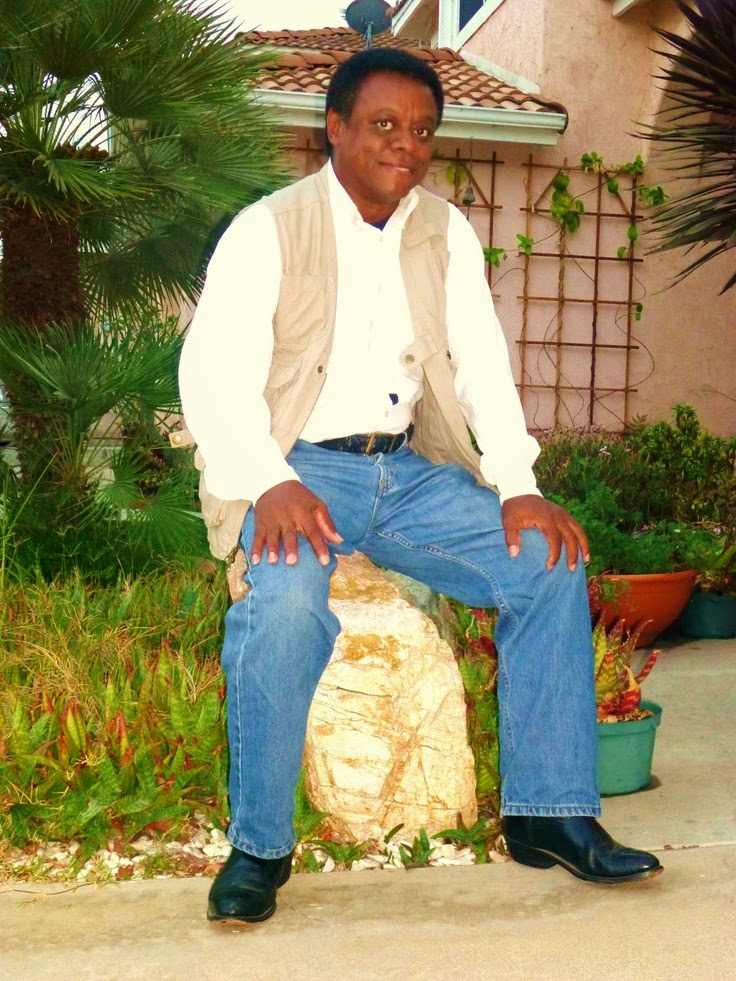 Earth Day is middle aged now.  Forty-five years old and counting.  We have organized and participated in numerous Earth Day activities for the past three decades.  From river and creek clean ups to National Mall activities to local events, Earth Day has been quite a tradition for us.  Yet, when it comes to the environmental community's most important issue(s), climate change and global warming, we believe nuclear power should be a central component in reducing emissions into the atmosphere.

It's a little-known fact -- especially among the environmentalist community -- that America's nuclear plants are the workhorses of our clean air energy production. Each year, these plants produce 63 percent of all the carbon-free energy generated in the U.S. These plants helped us avoid 589 million metric tons of carbon dioxide emissions in 2013. To put that in perspective, that equals the amount of carbon emissions emitted by 113 million passenger cars annually. Plus, nuclear energy's life-cycle emissions -- including any emissions from mining, fuel production, plant construction, operation, and decommissioning -- are among the lowest of all electricity sources. (More)

Now for additional news.  I begin a cross country trek starting on Earth Day (April 22) across the Unites States of America.  I have never driven across this great land of ours, even though I have flown across it many times.  I want to see this great country.  So I will be driving from Washington, DC to Los Angeles, California.  I anticipate that it will take 5 to 6 days to complete this trip.  I am driving my 20 year old Toyota Camry.  It still gets pretty good mileage.  I will chronicle the trip on my Facebook page.  Wish me luck.
Posted by Norris McDonald at 1:24 PM No comments:

The U.S. Environmental Protection Agency (EPA) released its 20th Inventory of U.S. Greenhouse Gas Emissions and Sinks today, showing a two percent increase in greenhouse gas emissions in 2013 from 2012 levels, but a nine percent drop in emissions since 2005.
Total U.S. greenhouse emissions were 6,673 million metric tons of carbon dioxide equivalent in 2013. By sector, power plants were the largest source of emissions, accounting for 31 percent of total U.S. greenhouse gas pollution. The transportation sector was the second largest source, at 27 percent. Industry and manufacturing were the third largest source, at 21 percent. The increase in total national greenhouse gas emissions between 2012 and 2013 was due to increased energy consumption across all sectors in the U.S. economy and greater use of coal for electricity generation.
This year, EPA is publishing key data in a new, online Greenhouse Gas Inventory Data Explorer tool, which allows users to view, graph and download data by sector, year and greenhouse gas. EPA will be holding an informational webinar on April 22 at 1 p.m. EST to demonstrate the Data Explorer tool and its features, and provide a tutorial on common searches.
Greenhouse gas emissions are driving climate change, which threatens the health and well-being of Americans and future generations through decreased air quality; extremes in heat and other weather events; increased incidence of food-, water-, and insect-borne diseases; and other impacts. Comprehensive greenhouse gas emissions data are an essential tool to help understand the primary sources of emissions and identify cost-effective opportunities to reduce them.
Under President Obama’s Climate Action Plan, EPA is taking steps to address carbon pollution from the power and transportation sectors, and to improve energy efficiency in homes, businesses and factories.  Current greenhouse gas and fuel economy standards for cars and light trucks and EPA’s proposed Clean Power Plan will eliminate billions of tons of greenhouse gas pollution, save lives through air quality benefits and save Americans money at the pump.
The agency prepares the inventory annually in collaboration with other federal agencies and submits the report to the Secretariat of the United National Framework Convention on Climate Change every year on April 15. The inventory presents historical emissions since 1990 and covers seven key greenhouse gases: carbon dioxide, methane, nitrous oxide, hydrofluorocarbons, perfluorocarbons, sulfur hexafluoride, and nitrogen trifluoride. In addition to tracking U.S. greenhouse gas emissions, the inventory also calculates carbon dioxide that is removed from the atmosphere through the uptake of carbon in forests and other vegetation. EPA has been publishing the inventory since 1994, but tracks back to 1990.
More on the U.S. Greenhouse Gas Inventory Report:
View and sort the data in EPA’s Greenhouse Gas Inventory Data Explorer:
Posted by Norris McDonald at 10:46 AM No comments:

Governor Jerry Brown on Wednesday ordered cities and towns across California to cut water use by 25% as part of a sweeping set of mandatory drought restrictions, the first in state history. The directive comes more than a year after Brown asked for a 20% voluntary cut in water use that most parts of the state have failed to attain, even as one of the most severe modern droughts drags into a fourth year.  It also came on the day that water officials measured the lowest April 1 snowpack in more than 60 years of record-keeping in the Sierra Nevada.


Brown announced the executive order in a Sierra Nevada meadow that provided a dramatic illustration of the state's parched conditions. Emphasizing that the drought could persist, Brown said Californians must change their water habits. The order focused on urban life even though agriculture accounts for roughly three quarters of Californians' water usage:


The order aims to reduce the amount of water used statewide in urban areas in 2013 by 25%.  The State Water Resources Control Board will release draft regulations in mid-April to implement the order. It plans to approve the regulations in early May. Local agencies will receive targets for cutting water use based on how well they've done so far. 
15,272,670 CO2 allowances were sold at the auction at a clearing price of $5.41. Allowances sold represent 100 percent of the CO2 allowances offered for sale by the nine states. Bids for the CO2 allowances ranged from $2.05 to $12.50 per allowance. Additional details are available in the Market Monitor Report for Auction 27..
10 million cost containment reserve (CCR) allowances were also available for sale. None of the CCR allowances were sold. The CCR is a fixed additional supply of allowances that are only available for sale if CO2 allowance prices exceed certain price levels ($6 in 2015, $8 in 2016, $10 in 2017, and rising by 2.5 percent each year thereafter to account for inflation). The 10 million CCR allowances remain available for sale in 2015. The auction generated more than $82 million for reinvestment in strategic energy and consumer benefit programs, including energy efficiency, renewable energy, direct bill assistance, and GHG abatement programs. Cumulative proceeds from all RGGI CO2 allowance auctions now exceed $2 billion dollars. To receive announcements relating to future auctions and other RGGI news, please join the RGGI, Inc. mailing list at http://www.rggi.org/news/mailing_list.

More data is also available at: http://www.rggi.org/market/co2_auctions/results.
Posted by Norris McDonald at 9:09 PM No comments: Source: U.S. Energy Information Administration based on data from the Surface Transportation Board and other information
Note: Crude-by-rail movements greater than 1,000 barrels per day are represented on the map; short-distance movements between rail yards within a region are excluded. PADD denotes Petroleum Administration for Defense District.
For the first time, EIA is providing monthly data on rail movements of crude oil, which have significantly increased over the past five years. The new data on crude-by-rail (CBR) movements are integrated with EIA's existing monthly petroleum supply statistics, which already include movements by pipeline, tanker, and barge. The new monthly time series of crude oil rail movements includes shipments to and from Canada and dramatically reduces the absolute level of unaccounted for volumes in EIA's monthly balances for each region.
EIA is initiating the new series with monthly data from January 2010 through the current reporting month, January 2015. Total CBR movements in the United States and between the United States and Canada were more than 1 million barrels per day (bbl/d) in 2014, up from 55,000 bbl/d in 2010. The regional distribution of these movements has also changed over this period.
The maps below provide general flows of CBR movements annually from 2010 through 2014. 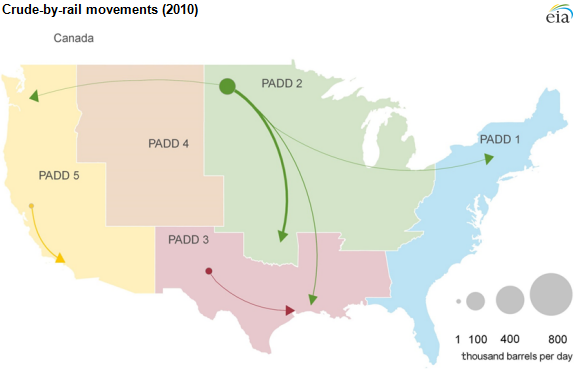 Source: U.S. Energy Information Administration based on data from the Surface Transportation Board and other information
Note: Crude-by-rail movements greater than 1,000 barrels per day are represented on the map; short-distance movements between rail yards within a region are excluded.


The Williston Basin in North Dakota (PADD 2) was the primary origin of 55,000 bbl/d of CBR shipments in 2010, with most shipments remaining in the Midwest region. Rail tank cars were used mainly to move Bakken crude oil to the Cushing, Oklahoma, storage and pipeline hub. The remaining volumes of Bakken CBR shipments went to Gulf Coast and East Coast refineries (PADDs 3 and 1, respectively). (DOE-EIA)
Posted by Norris McDonald at 5:40 PM No comments:

Source: U.S. Energy Information Administration, Petroleum Supply Monthly
U.S. crude oil production (including lease condensate) increased during 2014 by 1.2 million barrels per day (bbl/d) to 8.7 million bbl/d, the largest volume increase since record keeping began in 1900. On a percentage basis, output in 2014 increased by 16.2%, the highest growth rate since 1940. Most of the increase during 2014 came from tight oil plays in North Dakota, Texas, and New Mexico where hydraulic fracturing and horizontal drilling were used to produce oil from shale formations.
In percentage terms, the 2014 increase is the largest in more than six decades. Annual increases in crude oil production regularly surpassed 15% in the first half of the 20th century, but those changes were relatively less in absolute terms because production levels were much lower than they are now. Crude oil production in the United States has increased in each of the previous six years. This trend follows a period from 1985 to 2008 in which crude oil production fell in every year (except one).

Source: U.S. Energy Information Administration, Petroleum Supply Monthly
Although oil production is expected to rise in 2015 and again in 2016, the growth is not expected to be as strong as in 2014. Since mid-2014, the price of crude oil has fallen about 50%, which has slowed production in marginal drilling areas and focused investment in the more developed areas of tight oil plays. Annual crude oil production is expected to grow at a slower rate, 8.1% this year and 1.5% next year.  (DOE-EIA)
Posted by Norris McDonald at 4:56 PM No comments: