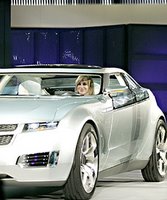 The Lithium-ion car batteries are expensive. Once they are mass produced the price will come down. And Lithium-ion batteries don't like heat. That little problem can be solved too. The GM Volt, right, is a big step in the right direction. The Volt still has a gasoline engine. We would like to replace that with a fuel cell. The Volt will travel 40 miles on the battery before tapping into the gasoline engine. GM killed off its previous electric vehicle. GM has also sold more cars outside the U.S. than in the U.S. in the last two years. Conversely, Toyota is quickly becoming the top car seller in the U.S. Ford barely held them off for the number 2 position behind GM last year. Toyota Motor Company also has plans to build subcompact cars in China.

We believe the true hybrid car revolution will probably happen in China. Amercans are spoiled and want more creature comforts when the average Chinese citizen might be more interested in a vehicle that will simply take him or her to and from work. Chrysler and China's Chery Automobile Company plans to build small cars for sale worldwide. The tiny 'B-cars' are a good model for the plug-in fuel cell hybrid electric vehicles the Center is promoting. Malcolm Bricklin lost out on a deal to partner with Chery Automobile Comapny to build a revelutionary plug-in hybrid. DaimlerChryler beat him out. (Electric Vehicles in China) (Wall Street Journal)
Posted by Norris McDonald at 7:59 PM