The carbon emissions of China's electric power sector will jump by about a third this year and surpass the total emissions of the U.S. electric power industry for the first time, according to a report, by the Center for Global Development, a Washington-based think tank. Worldwide, power generation accounts for 37 percent of energy-related carbon dioxide emissions. The report highlights the challenge of curbing greenhouse gases in time to slow climate change while maintaining world economic growth. According to the report, Chinese power plants will produce about 3.1 billion tons of CO2 this year, up from about 2.3 billion tons in 2007. U.S. power plants are expected to produce about 2.8 billion tons of CO2 this year, about the same as last year.

The United States spews more carbon dioxide per person than other nations. Electricity usage here produces about 9.5 tons of CO2 per person, compared with 2.4 tons per person in China, 0.6 in India and 0.1 in Brazil, the report said. The report shows that over the past eight years, global carbon dioxide emissions have grown to 11.4 billion tons a year.
Half of the biggest carbon emitters worldwide are Chinese power companies, led by Huaneng Power International, an independent company initially led by the son of former premier Li Peng. The next biggest are the South African utility Eskom, China Huadian Group and the Atlanta-based Southern Co., which has 4.4 million customers and 42,000 megawatts of generating capacity. (The Washington Post, 8/27/08)
Posted by Norris McDonald at 10:57 AM No comments:

Currently there are more than 7,000 leases in the Gulf Outer Continental Shelf that account for 27 percent of the Nation’s domestically produced oil and 15 percent of the domestically produced natural gas. More than 30,000 jobs are directly related to Gulf energy exploration and production. The areas under a congressional ban contain an additional 18 billion barrels of oil and 76 trillion cubic feet of natural gas in yet-to-be-discovered fields.

Interior's Minerals Management Service, which oversees offshore leasing, has raised the rate for leases in two March 2008 gulf sales to 18.75 percent. The move comes roughly nine months after MMS announced that the royalty rate for new deepwater leases would be increased from 12.5 percent to 16.7 percent. Alabama, Mississippi, Louisiana and Texas will share 37.5 percent of the revenues from leases in this sale.

EPA has identified areas across the country that are either meeting or not meeting national standards for fine particle pollution, or PM 2.5. In response to recommendations from state and tribal representatives, the agency sent letters outlining areas it is considering designating as attainment or nonattainment for the 24-hour fine particle standards. Today, the agency notified 25 states that they currently meet the fine particle standards, while the remaining states have at least one area under consideration for a nonattainment designation. A nonattainment area would include counties with monitors violating the 24-hour standardand nearby counties that contribute to that violation.
EPA will make formal designations of attainment and nonattainment areas in December 2008, after states and tribes comment on the proposals and if needed, provide additional information. Once designations take effect, they become a component of state, local and tribal governments efforts to reduce fine particle pollution to meet national standards. Designations also help let the public know whether their air quality is healthy. Exposure to fine particle pollution can cause serious health problems, ranging from increased hospital admissions and doctor and emergency department visits for respiratory and cardiovascular disease, to nonfatal heart attacks, to premature death. In September 2006, EPA dramatically strengthened the fine particle standards to protect public health, tightening the 24-hour standard from 65 to 35 micrograms percubic meter. Recommendations from states and tribes along with EPA’s responses are available at EPA 2006 Particulate Matter Designations. Or Contact: Dale Kemery, (202) 564-4355
Posted by Norris McDonald at 4:48 PM No comments:

Utilities Trim Trees Or Get Fined

Trees falling onto transmission wires in storms or wires sagging in the heat into tree limbs are to blame for most of the major U.S. blackouts, according to the North American Electric Reliability Corp. (NERC). It is estimated that 90% of weather-related outages are caused by trees hitting power lines. A nationwide order to trim trees near power lines could decrease significantly the kinds of power outages that plunge whole states into darkness. Mandatory tree trimming did not gain momentum until Aug. 14, 2003, when transmission lines owned by FirstEnergy in Ohio came into contact with tree limbs and triggered the shutdown of 21 power plants in three minutes in the eastern USA and Canada.
In 2005, Congress passed a bill requiring tree trimming, but it was not enforced until 2007 to give utilities time to comply. It was not until this summer that NERC, which administers the law, began fining utilities that have not moved aggressively enough to comply. The first two fines, totaling $255,000, were issued in June. NERC says the fines can go as high as $1 million per day.

The federal rules affect only high-voltage transmission lines and not the neighborhood wires known as distribution lines. It is transmission lines that carry the risk of major outages.
ENERGY POLICY ACT OF 2005 (H.R. 6)
Title XII - Electricity
Electricity Modernization Act of 2005 -
Subtitle A - Reliability Standards
Section 1211 -
Amends the Federal Power Act to grant FERC jurisdiction over the Electric Reliability Organization, over regional entities, and over all users, owners and operators of the bulk-power system (except in Alaska and Hawaii), for purposes of approving reliability standards and enforcing compliance.
Requires federal agencies responsible for approving access to electric transmission or distribution facilities to expedite any federal agency approvals that are necessary to allow the owners or operators of such facilities to comply with any FERC-approved reliability standard that pertains to vegetation management, electric service restoration, or resolution of situations that imminently endanger facility reliability or safety.
Posted by Norris McDonald at 5:10 PM No comments:

BP decided to shut down the pipeline that runs through parts of Georgia controlled by Russian troops. Vladimir Putin views the pipeline as a larger campaign by Washington to contain and isolate Russia and limit the expansion of its burgeoning energy empire. It was just as Putin was coming to power in 1999 that an agreement was reached to create the Baku-Tbilisi-Ceyhan (BTC) pipeline, above. The project would allow Azerbaijan and its production partner, BP, to bypass Russia and transport their newly drilled oil instead through Georgia and Turkey to a port in the eastern Mediterranean.

Before the BTC, because of Russia's control of the only pipeline system linking former Soviet republics with the West, it had been able to extract most of the profit from any oil and gas that these newly independent countries could produce. But with BTC, which had the active support of the U.S. and European governments, Russia would lose its monopoly, opening the way for Western oil companies to make multibillion-dollar investments in the energy-rich Caucasus states. (The Washington Post 8/13/2008)
Posted by Norris McDonald at 4:54 PM No comments: 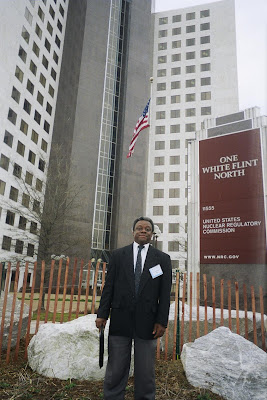 Although largely unheralded by the nuclear industry, unrecognized by the media and vilified by the environmental movement, The Center has been, and will continue to be, the environmental organization leader in promoting this solution to emission free production of electricity.

Our work speaks for itself:

Participate in NRC Headquarters Meeting on COL for Duke Energy (2005)

Signing of Energy Policy Act of 2005 in Albuquerque, New Mexico