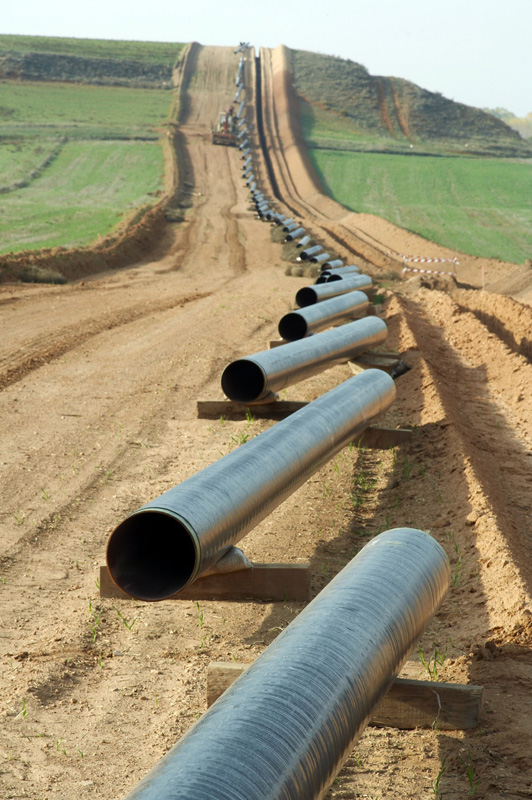 Over the past five years, there has been a significant increase in the development and production of natural gas within the Appalachian Basis in Ohio and Pennsylvania. The proposed NEXUS project, which is being developed jointly by Spectra Energy and DTE Energy, will connect Ontario gas consumers to these new and growing supplies and provide Ontario consumers with greater supply diversity, security and cost competitiveness.

The goal is to ensure that Ontario gas consumers, including homes, businesses and industry, have secure access to a diverse supply of competitively-priced natural gas.

Abundant North American supplies are keeping prices low for natural gas consumers. In fact, the price Union Gas customers pay for natural gas has steadily declined and is lower today than it was 10 years ago. In addition.  (State of Ohio)

Posted by Norris McDonald at 4:49 PM No comments: 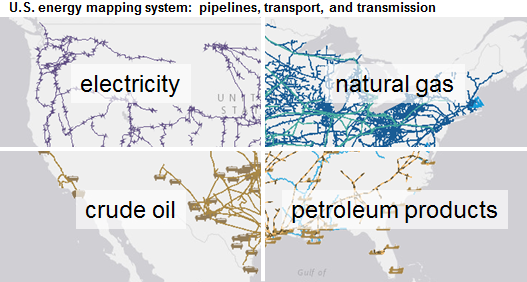 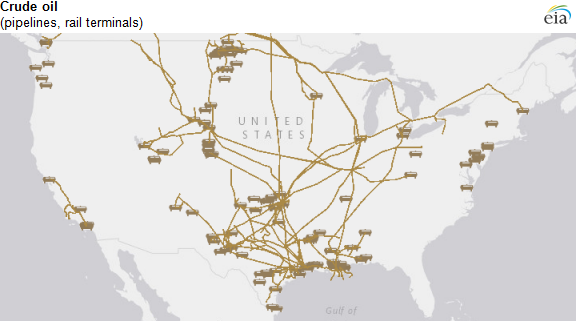 
Crude oil pipelines and rail terminal locations are based on publicly available data.
These map layers can be presented over several base layers with geographic, topographic, street, or satellite image detail, as well as with state, county, and congressional district borders.
Each state's map is also included as part of EIA's State Energy Data System. For instance, within North Dakota, viewers can see several components of energy infrastructure (pipelines, rail terminals, transmission lines) in addition to parts of the energy system, such as the locations of natural gas processing plants, coal mines, and wind power plants (including individual turbines). 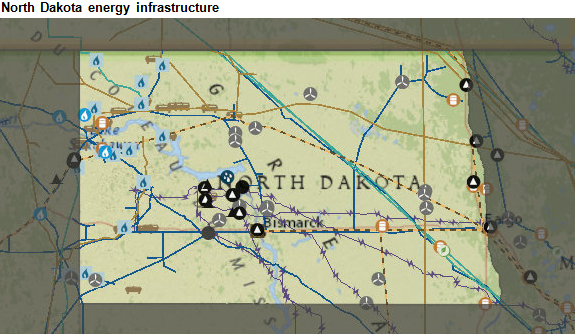 (DOE-EIA)
Posted by Norris McDonald at 5:14 PM No comments:

Congress’s bipartisan spending bill lifted the ban on crude oil exports.  The annual appropriations bill included a provision to lift the ban that had been put in place in 1975 to protect consumers from international crises like the OPEC oil embargo.
The deal allowed a five-year renewable energy tax credit extension.
The Democratic leadership traded this ban for a small extension of taxes that support renewable energy. (The Hill, 12/16/2015)

Posted by Norris McDonald at 1:43 AM No comments:

Data On Spent Nuclear Fuel In the USA 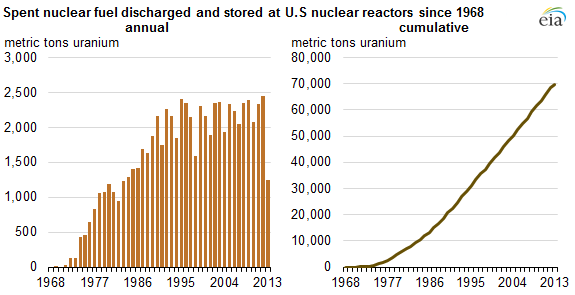 Source: U.S. Energy Information Administration, Form GC-859, Nuclear Fuel Data Survey
The U.S. Energy Information Administration recently released data from its Nuclear Fuel Data Survey on the amount, type, and characteristics of spent nuclear fuel once it is discharged from a reactor. As nuclear electricity generation has continued to increase, the inventory of discharged spent fuel from nuclear reactors has grown steadily since the 1970s.
The latest Nuclear Fuel Data Survey data show that a total of 241,468 fuel assemblies, with an initial loading weight of about 70,000 metric tons of uranium (MTU), were discharged from and stored at 118 commercial nuclear reactors operating in the United States from 1968 through June 2013. Illinois, Pennsylvania, and South Carolina have the highest amount of stored nuclear material, with more than 4,000 MTU in each state.
Nuclear reactors are fueled by fissionable material, most commonly uranium, that has been enriched and formed into fuel rods. These rods are bundled together to form fuel assemblies, which are loaded into the reactor core and irradiated. These assemblies are used in the reactors for multiple cycles, with each cycle typically lasting between 18 and 24 months. After being irradiated, the spent fuel assemblies are highly radioactive and must be properly stored.
There are two storage methods used for spent fuel: spent fuel pools and dry cask storage. The spent-fuel-pool approach involves storing spent fuel assemblies in large pools of water that cool the assemblies and provideshielding from the radiation. Dry cask storage allows spent fuel already cooled in a spent fuel pool for several years to be stored inside a container, called a cask, filled with inert gas. Each cask is surrounded by steel, concrete, or other material to provide shielding from radiation. All spent fuel storage is regulated by the U.S. Nuclear Regulatory Commission.
Approximately two-thirds of total spent nuclear fuel is from pressurized-water reactors, and about one-third is fromboiling-water reactors. In the United States, nearly all spent nuclear fuel is currently stored on-site at commercial nuclear power plants. A very small amount, less than 1%, has been shipped to away-from-reactor, off-site facilities. 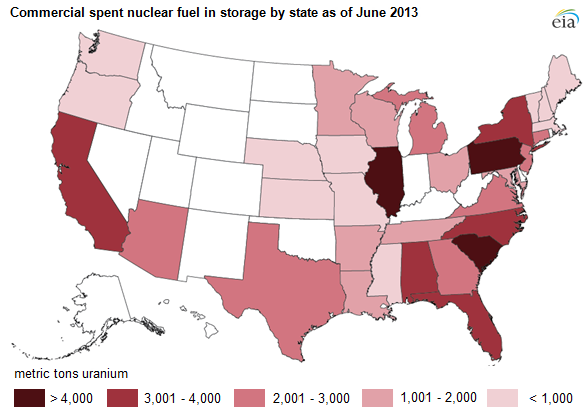 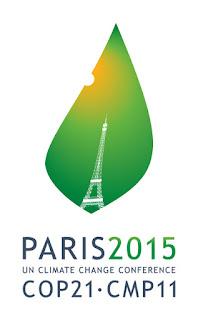 The COP-21 is drawing about 10,000 government representatives to the Le Bourget conference center in a northeastern Parisian suburb, plus 7,000 observers per week and 3,000 journalists.  French President Francois Hollande and President Obama made kick off speeches.
Key Points On the COP-21 Agenda
1)      Intended Nationally Determined Contributions (INDCs) – The Paris agreement is anticipated to be a bottom-up treaty, with each country setting goals based on their unique national circumstances. These Intended Nationally Determined Contributions, or INDCs, will form the basis of the country-specific commitments under the new UN climate treaty. It is also expected that periodic review of these commitments will be instituted along with measuring, reporting, and verification to ensure the integrity and ambition of the commitments.  While may seem to be making INDCs, there are many questions as to whether countries will live up to these commitments.  Even the US commitment is being questions by experts as not adding up to the 26-28% reduction.
2)      Green Climate Fund – Financing issues are among the most controversial in Paris, and they could easily derail any agreement. Many developing country INDCs are conditioned on financial support and technology transfer.  The Green Climate Fund (GCF) was proposed at COP-15 in Copenhagen in 2009, refined in subsequent meetings, and became operational in 2014. GCF aims to provide support to developing country efforts to reduce their GHG emissions and to adapt climate change.  However, this breaks down, it is clear that a significant portion of the expected funds—certainly tens if not hundreds of billions of dollars over many years—would be coming from public sources and would have to be appropriated by Congress.
3)      Intellectual property – Developing countries have used this provision deftly to justify their attempts to weaken intellectual property rights (IPR) protections, ostensibly to remove the supposed “barriers” to technology transfer raised by IPR. Compulsory licensing and a fund supported by developed countries to buy down IP are two of many proposals being bruited. IPR serve as a fundamental catalyst of innovation, and study after study has shown that it is not a barrier to technology transfer. A weakened IPR regime such as that being proposed above would provide precious little incentive for companies to invest in advanced technologies if after years of research and development and millions or even billions of dollars invested, their inventions could be expropriated outright by companies in developing countries and manufactured and sold around the world at reduced cost. Under such a circumstance, some of the most innovative companies in the developed world would simply abandon the development of advanced energy technologies.
4)      Technology Transfer – Tied to INDCs and the Green Fund, Technology Transfer is one fundamental issue that could bridge the gap.  It frankly is a better way to move toward a positive goal transforming our energy economy:  engage developing countries with advanced technology transfer to help them grow their economies more efficiently and cleanly.
5)      Verification – An issue that does not receive the attention it deserves is measuring, reporting, and verification of climate policies. As things stand now, the system of MRV that is likely to come out of Paris will focus not on whether a country meets its emissions goal, but on whether it implements the policies and measures designed to meet its goal. In other words, MRV is more about process than results. MRV will be especially challenging in developing countries. Transparency is a key to open markets and planning, and businesses will be reticent to invest in developing economies without assurances that its investments in emission reduction and offset projects are real and that government activities in support of INDCs have integrity.
6)      Binding Legal Commitments Or Non-binding Political Agreement – The Paris Agreement will not be a treaty.  The Paris Agreement will be a multilateral international agreement that will include almost every country in the world. Yet some believe that If the outcome of the Paris Conference is to make promises to reduce emissions legally binding, then the Paris Agreement must be submitted to the Senate for approval as a treaty under Article II.  This will continue to be a contentious point of negotiating among parties and one that US Senators will be watching closely.
( (Frank Maisano)
Posted by Norris McDonald at 6:44 PM No comments: