The Center, in cooperation with National Clean Fuels (NACF), has entered into a preliminary agreement with Port Gibson, Mississippi Mayor Fred Reeves to develop alternative energy projects. Specifically, the Center intends to construct and operate a 10 megawatt biomass-to-electricity plant in Port Gibson, Mississippi. Project engineering will be coordinated by Dyson Engineering and Technical Services. 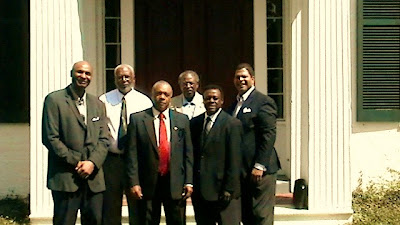 Mississippi lawmakers have authorized $51 million in new incentives to help a company to bring three biofuel plants to Mississippi. The incentives, along with an existing $30 million loan already available from the state, add up to an $81 million incentive package. The incentive package also included $2 million for research on biomass usage in producing renewable fuel that goes to Alcorn State University and Mississippi State University. It is being touted that Mississippi could become to biofuels what Texas is to oil. [The Natchez Democrat, "Could Mississippi Be Biomass Headquarters, 8/31/2010]
Scoping Visit 2

The Center and National Clean Fuels (NACF) engaged in their second scoping trip in Mississppi, which is part of the process for their planned construction of a 10 megawatt biomass-to-electricity plant in Port Gibson, Mississippi.  The team included our Center President Norris McDonald and Center Vice President Derry Bigby, NACF President Maurice Stone and Al Dyson, president of Dyson Engineering and Technical Services, Inc.  The Rudy Shields Green Electric plant is projected to begin operating in 2012.
﻿
﻿ The Center scoping team met with representatives of Entergy Mississippi at one of their substation offices in Clinton, Mississippi to get a briefing on the process for interconnection to the electrical grid.  Entergy Mississippi provided a comprehensive and technical presentation on the steps necessary to complete a power purchasing agreement and all of the required steps to construct the plant.   The Entergy briefing was provided by Ed W. Porter, Senior Account Service Manager-Commercial & Industrial Accounts and Dr. Rick Bowley, Ph.D, Senior Wholesale Executive-Transmission Project Development.
﻿﻿
﻿﻿ Our team met with the Mississippi Department of Environmental Quality (DEQ) at their headquarters office in Jackson, Mississippi.  The DEQ meeting included a briefing about the air and other environmental issues involved in getting appropriate permits for the facility.  These include construction and operating permits (Clean Air Act) and a stormwater runoff permit.  DEQ staff was very helpful and addressed all of our questions.  These questions ranged from capacity factors to timetables to forestry issues.  The DEQ briefing team included Bryan D. Collins, Chief, Energy & Transportation Branch, Montie Hardaway Glenn, Environmental Engineer, Office of Pollution Control, and John Havard, Permit Writer.

The Center scoping crew met with staff at Alcorn State Univesity, in Alcorn State, Mississippi, which is just outside of Port Gibson.  We briefed them on the biomass-to-electricity project and they shared their research projects in the areas of sustainable agriculture and renewable energy.  We discovered that there is an electrical substation on the campus that has a gas line nearby.  A gas line can serve as backup for the wood feedstock for a woodchip power plant.  The Alcorn State University team included Dr. Alton B. Johnson, V.P. for Development and Marketing and Foundation Director, Dr. Dalton McAfee, Dean, School of Agriculture, Research, Extension and Applied Sciences (AREAS), Dr. Girish K. Panicker, Director, Conservation Research Center, Yaw A. Twumasi, Assistant Professor, Geographic Information Sciences & Technology Program Coordinator, Micheal Ezekwe, Director, Swine Development Center, Professor of Animal Science, among others.
﻿
Our team met with a representative of the Mississippi Development Authority Energy Division.  Terrence R. Spears, Senior Project Manager, provided a description of the renewable energy programs at the agency.  After describing our project, Mr. Spears described their agency's energy investement program, the various education and outreach programs available from the agency and he answered all of our questions.


The Center, NACF and Mayor Reeves hope to include Port Gibson in this new green development renaissance.

After the meeting, Center President Norris McDonald and Center Vice President Derry Bigby took a short tour of the Mississippi River and Lake Yucatan on the Louisiana side of the river (see video below). The river tour was arranged by Mayor Reeves and was conducted by Soloman Wilson.


Scoping Visit 3
The Center for Environment, Commerce & Energy (Center) met with representatives from South Mississippi Electric Power Association (SMEPA) and Southwest Mississippi Electric Power Association (SWEPA) to discuss feasibility studies, interconnection requirements and a power purchasing agreement on its third biomass-to-electricity (BTE) power plant scoping visit. Plans call for the new BTE plant to generate electricity by gasifying sawdust and woodchips to power a massive turbine.
The Southwest Mississippi EPA electrical substation is on Alcorn State University property and the utility has a long term lease with the university to operate the facility. The Center is seeking a similar arrangement for its proposed 10-megawatt power plant. The Center also met with Port Gibson Mayor Fred Reeves and other city representatives and stakeholders to discuss the power project.
The Center met with Alcorn State University faculty and staff to discuss cooperative energy proposals, including leasing land to the Center for the biomass-to-energy power plant.  The meeting included Dean of Agricultural Research and Applied Sciences Alton Johnson, Vice President for Facility Management and Strategic Planning Jessie Stephney, and Associate Vice President for Development and Alumni Affairs Marcus Ward.  The Center team included Center President Norris McDonald, Center Vice President Derry Bigby and engineering consultant Al Dyson, president of Dyson Engineering and Technical Services of Memphis, Tennessee.  The meeting was held on campus at the Extension and Research Complex.
The Center expects to meet with the new president of Alcorn State in January to begin negotiations to secure a long term lease for the property to build and operate the biomass -to-electricity plant. We are also discussing supplemental projects that could complement the biomass project. These projects include fuel cell electricity production and natural gas pipelines. The natural gas will serve as a backup source for the biomass plant.

The Center toured the Alcorn State University campus and met with facilities managers to discuss the implications of the power plant. The university is in a very rural area and is basically a self-contained city, providing its own drinking water from wells (see one below), water storage and treatment facility (see photo at left) and has its own wastewater treatment plant (see photo at right). There are also numerous research projects that are either ongoing or have ceased for various reasons, including the fuel cell and chicken production facilities. The Center is examining the feasibility of partnering with the university in an expanded program to assist this 'city' in meeting its energy needs.
﻿
Alcorn State University constructed a groundbreaking fuel cell electricity generating station 14 years ago.  However, lack of funding and staff changes led to the project being mothballed.  The Center is interested in working with Alcorn State University to install a modern hydrogen fuel cell to revive this groundbreaking project.  All of the infrastructure is still there, including a 3-transformer interconnect with the electricity line.
﻿
The Center met with Port Gibson Mayor Fred Reeves and other stakeholders to discuss the biomass-to-electricity project.  Mayor Reeves has been a tireless advocate and ally in supporting the biomass-to-electricity.  In addition to the energy reliability and environmental benefits, Mayor Reeve's singular interest is in creating more jobs in Port Gibson.  The stakeholders shared their support for the project and encouraged Center representatives to proceed with all deliberate speed to get construction approved.  The Center has approval from the City of Port Gibson to proceed and is seeking county approval for the project.
The Center for Environment, Commerce & Energy and its project affiliate, National Clean Fuels (PinkSheets: NACF) are working together to build a biomass-to-electricity (BTE) plant near Port Gibson, Mississippi.  During the trip, Center President Norris McDonald described to area stakeholders how the biomass generator will produce an abundance of energy that can be redistributed along the energy grid in Port Gibson and surrounding areas.
The Center and National Clean Fuels are dedicated to developing clean, reliable electricity production.
Scoping Visit 4 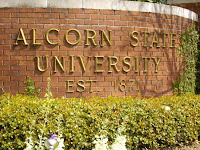 The Center for Environment, Commerce & Energy has established Green Electric (GE) as the subsidiary that will construct a biomass electricity plant in Mississippi.  On this fourth visit in four months, the Center met with local representatives to negotiate a land lease and to gauge the community acceptance of a wood chip power plant.  The proposed biomass-to-electricity (BTE) plant will convert wood chips into methane, which will be burned in a massive turbine that will provide 10-megawatts of electricity to the Mississippi electricity grid.  GE is seeking land use from Alcorn State University (ASU) and is also exploring a site location in the City of Port Gibson.
Center and National Clean Fuels (NACF) staff conducted their 4th scoping visit that included land lease negotiations with local property owners and government officials.  The February 15 - 17 scoping visit included meetings with staff and faculty at Alcorn State University, Mayor Fred Reaves, Port Authority representative AC Garner, Attorney Mike Espy, County Supervisor Charles Shorts and Country Administrator James Johnston.  Mike Espy has been retained as the Green Electric attorney for the BTE project.

Center and NACF staff met with faculty, staff and deans from Alcorn State University (ASU) in order to negotiate terms for the possible location of the plant somewhere on the massive property owned by the college.  The meeting included ACU Chief of Staff Marcus Ward, Dean Barry L. Bequette, Dr. Alton Johnson, Jessie Stephney and representatives from the physics department.

In addition to surveying sites for the BTE plant, Center representatives surveyed a prospective site for the corporate headquarters in downtown Port Gibson.  The building needs remodeling, but would be an excellent location for the Green Electric corporate headquarters.
Green Electric intends to obtain the location this year and intends to initiate construction of the plant within this same timeframe.  GE intends to complete purchase of this location early this year in order to facilitate local employment and to support GTE plant operations.
Center Seeking $15 Million Donation To Build Biomass Plant
﻿

The Center, through its subsidiary Green Electric (GE), is seeking to build a biomass-to-electricity plant in Port Gibson, Mississippi.  We have approval from the City of Port Gibson and Claiborne County Board of Supervisors to proceed.  The Center also has an agreement with AREVA to serve as construction manager for the project. 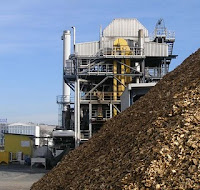 Initial funding for the scoping was provided by National Clean Fuels, Inc. (NACF) of Houston, Texas.  Over the past seven months, the Center staff and our contracted engineering firm, Dyson Engineering and Technical Services, visited Port Gibson four times.  After exploring three separate sites for the plant, the Center has decided on the location near an electrical substation in Port Gibson.  Mayor Fred Reaves and residents of the city are excited by the prospect of the project bringing jobs to the area.
Biomass projects are challenging and not necessarily the most attractive investments for investors.  The Center, as a nonprofit organization, has more leverage to make such a business an ongoing operation.  Even with a donation of $10 million to build the plant and $5 million to operate for five years, the economics of the project will be challenging.  However, the job creation benefits, global climate change mitigation implications and the electricity delivery service are worth the risk of building this facility in this area.
If you can help, please feel free to contact us.
Posted by Norris McDonald at 3:49 PM