Source: U.S. Energy Information Administration, International Atomic Energy Agency, World Nuclear Association
Nuclear power currently makes up slightly more than 2% of China's total power generation. However, the Chinese government has a stated goal to provide at least 15% of overall energy consumption by 2020 (increasing to 20% by 2030) from non-fossil fuel sources, including nuclear, hydroelectricity and other renewable sources. To help achieve this target, China plans to increase nuclear capacity to 58 gigawatts (GW) and to have 30 GW of capacity under construction by 2020.
China has rapidly expanded its nuclear capacity in the past several years, which likely will increase nuclear generation in the next few years. China's net installed nuclear capacity is 23 GW, after the country added 10 reactors totaling more than 10 GW since the beginning of 2013. By the end of 2015, China is expected to surpass South Korea and Russia in nuclear generating capacity, placing it behind only the United States, France, and Japan. China is also constructing an additional 23 GW of nuclear capacity that is slated to become operational by 2020. Operation of these units will make China the leading nuclear generator in Asia. Several more facilities are in various stages of planning.
All of China's nuclear plants are located along the east coast and southern parts of the country, near most of the country's power demand. Following Japan's coastal Fukushima nuclear disaster in 2011, China has increasingly considered construction of inland reactors.
China plans to take an ownership role throughout the entire nuclear supply chain. China intends to build strategic and commercial uranium stockpiles through overseas purchases and continue to develop domestic production in Inner Mongolia (north Central China) and Xinjiang (northwest China). China is developing nuclear fuel reprocessing facilities, which are expected to come online by 2017, according to the World Nuclear Association. China currently imports all of its reactor technology, but the country is in the process of designing its own large pressurized water reactors, the CAP1400, through a technology transfer with U.S.-based Westinghouse. Also, as part of its nuclear expansion program, China signed agreements with several countries (Romania, Argentina, Turkey, and South Africa) in 2014 to finance the construction of nuclear reactors and export its own nuclear technology.  (DOE-EIA)
Posted by Norris McDonald at 3:33 PM No comments:

I first toured San Onofre Nuclear Generating Station (SONGS) in 2005.  I was very impressed with the staff, the physical plant and the view at SONGS.  I have toured 12 nuclear plants all over the United States, in France and China.  I was fascinated that the non-nuclear generating part of the plant did not have a building around it.  The view of the Pacific Ocean also made this a uniquely beautiful environment for the operation of this emission free facility.  I was extremely disappointed when Southern California Edison (SCE) decided to close the facility and began the decommissioning process.

Without going through all of the legal, economic, technical and mechanical controversies that led to the closure, let me just say that the $4.7 billion approved to support decommissioning should be reprogrammed to reopening and operating the plant.  I suspect that for this amount of money, SCE could buy 2 brand new steam generators and handle the other expenses related to restarting the plant. I understand that SCE looked at the numbers and if they had to carry employees and other expenses while the Nuclear Regulatory Commission (NRC) took the time to see if the plant could operate safely at a reduced capacity, that they would lose money hand over fist.  Thus the closure decision.  But California desperately needs this 2,000 megawatts (MW) of emission free electricity.

Although SCE believes that the SONGS Settlement approved by the CPUC was fair and reasonable, there is now significant controversy around this Settlement.  Some of the controversy:

SCE's fight with Mitsubishi Heavy Industries over the steam generator problems will probably go on for years and make a lot of lawyers very rich.  The investigation and subsequent  legal issues related to the California Public Utilities Commission (CPUS) and SCE have placed a huge dark cloud over the Settlement Agreement.

Going forward, I will be trying to convince SCE, the regulatory agencies and other stakeholders. to reopen this plant.  And to reopen it with all deliberate speed.
Posted by Norris McDonald at 7:17 PM No comments: 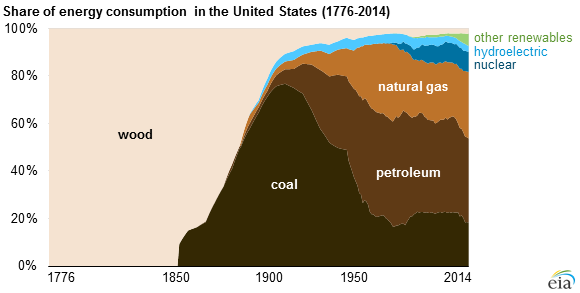 Source: U.S. Energy Information Administration, Monthly Energy Review
While the energy history of the United States is one of significant change, three fossil fuel sources—petroleum, natural gas, and coal—have made up at least 80% of total U.S. energy consumption for more than 100 years. Recent increases in the domestic production of petroleum liquids and natural gas prompted shifts between the uses of fossil fuels (largely from coal-fired to natural gas-fired power generation), but the predominance of these three energy sources is likely to continue into the future.
For the first several decades of American history, families used wood (a renewable energy source) as a primary source of energy. Coal became dominant in the late 19th century before being overtaken by petroleum products in the middle of the 20th century, a time when natural gas usage also rose quickly. Since the mid-20th century, use of coal increased again (mainly as a primary energy source for electric power generation), and a new form of energy—nuclear electric power—emerged. After a pause in the 1970s, the use of petroleum and natural gas resumed growth. Petroleum consumption decreased in recent years, but natural gas has continued to provide a greater share of U.S. energy consumption. In the late 1980s, renewable energy consumption (other than wood and hydroelectric) began to appear, increasing significantly in the mid-2000s. In 2014, the renewable share of energy consumption in the United States was the highest (nearly 10%) since the 1930s, when wood represented a larger share of consumption. Renewable energy is a small but growing piece of the U.S. energy mix. The greatest growth in renewables today is in solar and wind power, which along with geothermal and biomass, are included in other renewables.

Posted by Norris McDonald at 4:08 PM No comments:

A new report from The Brattle Group demonstrates the significant contributions that America's existing nuclear fleet makes to the country's economy. According to the analysis, nuclear energy plants – which provide 1/5 of the US' electricity and almost 2/3 of its carbon-free electricity – also add an impressive $60 billion to the country’s GDP each year.
According to Nuclear Matters Co-Chair former Senator Evan Bayh, “The significance of nuclear energy in a carbon-constrained context is often underestimated. And the data from the Brattle report shows just how important these plants are to the functioning of our economy. It is our hope that releasing this report will bring to light the need to properly value these plants in order to preserve their indisputable benefits.” 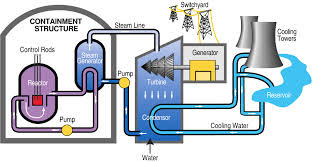 Nuclear Matters also believes these findings underscore the need to address the underlying challenges associated with existing plants’ premature closures.
The study also finds that nuclear energy plants support 475,000 high-paying jobs and contribute 10 billion in federal taxes each year. What's more, these efficient nuclear energy plants save consumers an average of 6% on their electricity bills.
Brattle’s report also demonstrates how these plants help protect the environment. Nuclear energy plants together avoid over 1/2 billion tons of carbon emissions each year, valued at $25 billion. These findings are especially important as our country looks to mitigate the harmful impacts of climate change.
To learn more about the report, visit NuclearMatters.com/ValueOfNuclear,
Posted by Norris McDonald at 12:42 PM No comments: 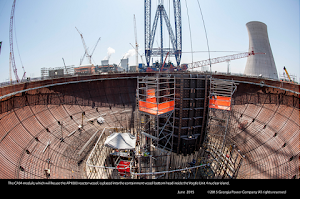 To further support the construction of two advanced nuclear reactors at the Alvin W. Vogtle Electric Generating Plant, the Department of Energy announced today it will issue $1.8 billion in loan guarantees to three subsidiaries of the Municipal Electric Authority of Georgia (MEAG Power). This is the last of three conditional commitments that were first announced by the Administration in 2010, which, when combined with the previously issued $6.5 billion in loan guarantees to Georgia Power Company (GPC) and Oglethorpe Power Corporation (OPC), allow the project to be fully financed.
The Vogtle project is the first new nuclear power plant to be licensed and begin construction in the U.S. in more than three decades.  The two new 1,100 megawatt Westinghouse AP1000® nuclear reactors at Vogtle represent the first U.S. deployment of this innovative technology and once they come on line, the new nuclear reactors are expected to provide enough reliable electricity to power nearly 1.5 million American homes and avoid nearly 10 million metric tons of carbon dioxide emissions annually.
The two new nuclear reactors at Vogtle will supplement the two existing reactor units at the facility. According to industry projections, the project will create approximately 4,600 onsite construction jobs and approximately 750 permanent jobs once the units begin operation.
The Energy Policy Act of 2005 authorized the Department to issue loan guarantees for projects that avoid, reduce, or sequester greenhouse gases and employ new or significantly improved technologies. To further help accelerate the deployment of advanced nuclear energy in the U.S., the Department also has $12.5 billion in loan guarantee authority available to support eligible innovative nuclear energy projects through the Advanced Nuclear Energy Projects Solicitation.
Currently, the Department’s Loan Programs Office (LPO) supports a large, diverse portfolio of more than $30 billion in loans, loan guarantees, and commitments, supporting more than 30 closed and committed projects. This portfolio is helping to advance the nation’s all-of-the-above energy strategy through projects including the first nuclear power plant to begin construction in the U.S. in the last three decades, one of the world’s largest wind farms, several of the world’s largest solar generation and thermal energy storage systems, and more than a dozen new or retooled auto manufacturing plants across the country.  (DOE)
Posted by Norris McDonald at 12:52 PM No comments: