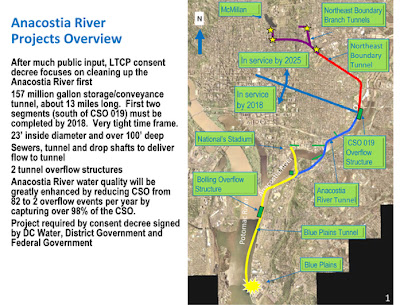 District residents will see their water bills more than double over the next six years in an effort to pay for a massive tunnel project aimed at stopping sewage from overflowing into the Anacostia and Potomac rivers.  Much of the increase is due to a dedicated tax to pay for a $2.6 billion tunnel that will run 13 miles from Northeast Washington, under the Anacostia, and end at D.C.'s Blue Plains treatment facility on the Potomac. The tax was implemented in 2009, but as construction ramps up, the average annual tax of $41.40 per household will increase to more than $345 by 2019, according to a recently released Brookings Institution report. Meanwhile, water bills are projected to increase from an average $576 per year to $1,248 per year for District residents.

The tunnel project, which will collect sewage and other runoff that now overflows into the surrounding waterways during rainstorms, isn't slated to wrap up until 2025.  The District is locked into the project, which is federally mandated by a 2005 consent decree to reduce sewer overflows.

Federal help with the project has been unpredictable, as funding went from $20 million in 2010 to $11.5 million this year.

Gov. Martin O'Malley signed legislation on Mya 1st that will double the flush tax for most Marylanders. The flush tax, a fee used to renovate wastewater treatment plants in an effort to clean up the Bay, will double from $30 to $60 starting in July, raising roughly $56 million.

The tax as passed is a far cry from the governor's earlier proposed hikes to the fee -- a panel had originally suggested tripling the charge.

Lawmakers say the extra revenue will help the state comply with new federally led efforts to restore the Bay's water quality by 2025, and that the legislation keeps Maryland ahead of the curve when it comes to protecting the environment.

Another bill requires local jurisdictions to adopt development practices that move septic systems away from areas where water pollution is more likely to occur. And the governor signed legislation that requires locally funded projects to prevent storm water runoff from making its way from roads into rivers, streams and farmland. (Washington Examiner, 5/23/2012, Washington Examiner, 5/2/2102)
Posted by Norris McDonald at 9:03 PM