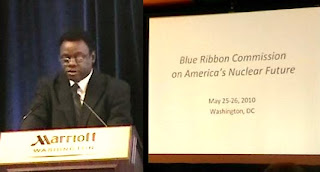 Center President Norris McDonald presented a statement before the Blue Ribbon Commission on America's Nuclear Future (BRC) hearing today at the Marriott Hotel in Washington, DC. McDonald gave his statement as Co-Chairman of the Nuclear Fuels Reprocessing Coalition (NFRC). The BRC met on May 25 and 26 to hear presentations from experts, to conduct commission business and to hear statements from the general public. The Blue Ribbon Commission on America’s Nuclear Future was established in by President Obama to come up with an alternative to Yucca Mountain as the nation’s repository for nuclear waste. The BRC operates under the authority of the U.S. Department of Energy (DOE).

The NFRC is promoting the establishment of a Nuclear Waste Management Agency (NWMA) to manage all federal and civilian spent nuclear fuel and high-level radioactive waste management programs currently under the control of the United States Department of Energy (DOE). The NFRC is recommending an amendment to the Nuclear Waste Policy Act of 1982 (42 U.S.C. 10101) to establish the United States Nuclear Waste Management Agency. We request that the Blue Ribbon Commission on America's Nuclear Future adopt the legislation we have drafted transferring nuclear waste management as a recommendation to Congress and President Barack Obama.

The Nuclear Waste Management Act of 2010 (NWM Act), in addition to transferring authority for managing nuclear waste from DOE to the NWMA, establishes and operates receipt of low-level radioactive waste, provides for supplementary segregation, provides for treatment and provides for burial or monitored/retrievable storage facilities on a fee basis. The NWM Act would establish spent nuclear fuel reprocessing as a viable technology to aid in achieving and maintaining our national security and national energy policy goals. We also support reprocessing plutonium and highly enriched uranium from nuclear warheads into fuel for use in commercial nuclear power plants.

McDonald is pictured at right with former Senator Pete Domenici, who is a member of the commission. After the hearing, they reminisced about the signing of the Energy Policy Act of 2005 at a ceremony at Sandia National Laboratory in Albuquerque, New Mexico. McDonald was a Special Guest of the White House.
Posted by Norris McDonald at 5:43 PM