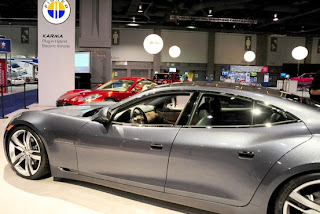 Fisker Automotive Inc, is a start up car company backed by former Vice President Al Gore, right, that has just received a $529 million U.S. Department of Energy loan to help build the Karma, left, a hybrid sports car in Finland. The Karma will will sell for about $89,000. Fisker also has facilities in Irvine, California and Pontiac, Michigan.

Fisker claims its DOE loan will be used to finance U.S. production of a $40,000 family sedan that has yet to be designed. Henrik Fisker started Fisker Automotive in 2007 to build plug-in electric hybrid cars. The four-door Karma, powered by a lithium-ion battery, will be able to run solely on electric power for 50 miles, and will achieve an average fuel economy of 100 mpg over the span of a year. Production is scheduled to start in December, with about 15,000 vehicles a year expected to hit the U.S. market starting next June.

Fisker's top investors include Kleiner Perkins Caufield & Byers, a veteran Silicon Valley venture-capital firm of which Gore is a partner. Other Fisker investors include Eco-Drive (Capital) Partners LLC, an investment consortium, and Qatar Investment Authority, a state-run investor based in Qatar.

Fisker's government loans will come from a $25 billion program established by Congress in 2007 to help auto makers invest in the technology to meet a new congressional mandate to improve fuel efficiency. In June, the DOE awarded the first $8 billion from the program to Ford Motor Co., Nissan Motor Co., and Tesla, which are all developing electric cars. (WSJ, 9/25/09)
Posted by Norris McDonald at 11:43 AM