Is The New Nuclear Power Plant Renaissance Over?

Recent decisions and information coming out of Congressional hearings indicate that the new nuclear power plant building renaissance could be over before it truly begins. Although the Nuclear Regulatory Commission (NRC) has received 17 applications to build 26 reactors, rapid economic and political changes are putting these applications at risk. Some nuclear utilities have already suspended their applications. The Obama administration decision to zero budget funding for Yucca Mountain combined with insufficient loan guarantees in a weakened Wall Street world are twin blows that were discussed at a Senate Energy and Natural Resources Committee hearing this morning. Senator Murkowski (R-AK) expressed deep concerns about these twin threats to building new nuclear power plants.
The NRC is currently examining the potential effects of the Yucca Mountain decision and will issue its findings later this year. Nuclear industry representatives state that they anticipated the possibility of Yucca Mountain not being licensed and that this was not a death blow to building new plants. But Murkowski expressed doubt about this, particularly when combined with insufficient loan guarantees. Right now, about $16 billion in loan guarantees, out of about $110 billion, in total Department of Energy loan guarantees, are targeted to nuclear power. The remainder of the loan guarantees are for renewables projects. 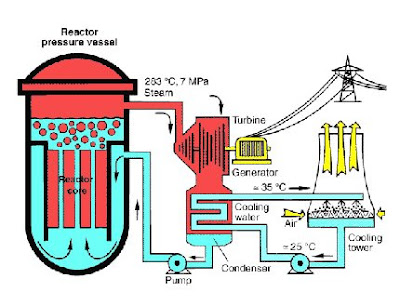 The Center believes the threat to building new nuclear power plants is real. When we first started supporting nuclear power in 2001, it was estimated that a new nuclear plant would cost about $1 billion. Now that estimate has ballooned to $8-$10 billion. This at a time when Wall Street is in melt down [forgive the pun]. Frankly, unless the federal government is willing to support nuclear power the way it has supported other institutions it deems 'too big to fail,' then there will be no nuclear power plant building renaissance.
Posted by Norris McDonald at 12:54 PM