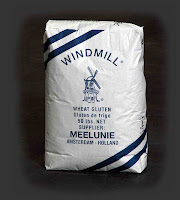 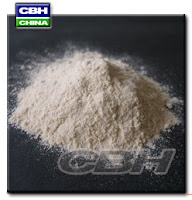 Wheat gluten, powder left-bagged right, contaminated with melamine has been found in pet food. The U.S. Food and Drug Administration (FDA) has identified a Chinese company (Xuzhou Anying ) as the source of the additive. Chinese authorities have arrested Mao Lijun, manager of the company. An American company, ChemNutra, based in Las Vegas, purchased the wheat gluten and resold it to pet food makers in the U.S. Although there is no nutritional value from melamine, unscrupulous producers add it so get a higher protein reading.
Melamine is an industrial chemical used to make plastics, fertilizer and surface coatings. Wheat gluten is a vegetable protein concentrate. There is a concern by the FDA that humans could consume the chemical indirectly by eating pigs and chickens that have consumed the contaminated wheat gluten. Suspect pet food has been recalled and the FDA is visiting hundreds of pet food manufacturers to gather samples for testing. The Chinese government is cooperating with the American government on this issue. (New York Times, 5-4-2007)
Posted by Norris McDonald at 6:51 PM