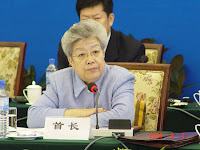 Chinese Vice Premier Wu Yi, left, met with President Bush in the Oval Office at the White House this week to discuss trade and Yuan policies. The United States has a $223 billion trade deficit with China. China and the USA agreed to increase air traffic between the two countries and to allow more access for American financial institutions into China. Ms. Wu was accompanied by 16 cabinet ministers and other top Chinese officials.
The Center believes that China and the USA should be having similar meeting to develop a framework for a Kyoto-type treaty (Kyoto II). Maybe the new treaty could be called the Beijing Protocol. The two countries are the top greenhouse gas produces in the world. Any agreement would probably be based on technology instead of arbitrary caps. We support a combination of nuclear power and plug-in fuel cell hybrid electric vehicles to mitigate global warming.
Posted by Norris McDonald at 10:15 PM