GAO Report Says States Get More Highway $$$ Than They Give 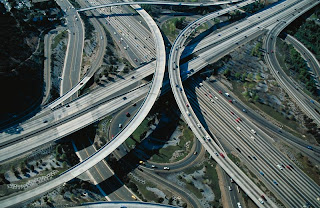 Federal funding for highways is provided to the states mostly through a series of grant programs known as the Federal-Aid Highway Program, administered by the Department of Transportation's (DOT) Federal Highway Administration (FHWA). In 2005, the Safe, Accountable, Flexible, Efficient Transportation Equity Act: A Legacy for Users (SAFETEA-LU) authorized $197.5 billion for the Federal-Aid Highway Program for fiscal years 2005 through 2009.

(1) how contributions to the Highway Trust Fund compared with the funding states received,

(2) what provisions were used to address rate-of-return issues across states, and

(3) what additional factors affect the relationship between contributions to the Highway Trust Fund and the funding states receive.

From 2005 to 2009, every state received more funding for highway programs than they contributed to the Highway Account of the Highway Trust Fund. This was possible because more funding was authorized and apportioned than was collected from the states, and the fund was augmented with about $30 billion in general revenues since fiscal year 2008. If the percentage of funds states contributed to the total is compared with the percentage of funds states received (i.e., relative share), then 28 states received a relatively lower share and 22 states received a relatively higher share than they contributed. Thus, depending on the method of calculation, the same state can appear to be either a donor or donee state.

The Equity Bonus Program was used to address rate-of-return issues. It guaranteed a minimum return to states, providing them with about $44 billion. Nearly all states received Equity Bonus funding, and about half received a significant increase--at least 25 percent--over their core funding. The infusion of general revenues into the Highway Trust Fund affects the relationship between funding and contributions, as a significant amount of highway funding is no longer provided by highway users. Additionally, using rate of return as a major factor in determining highway funding poses challenges related to performance and accountability in the highway program; in effect, rateof- return calculations override other considerations to yield a largely predetermined outcome--that of returning revenues to their state of origin.

Because of these and other challenges, funding surface transportation programs remains on GAO's High-Risk list. GAO is not making any recommendations. DOT reviewed a draft of this report and provided technical comments, which we incorporated as appropriate. (GAO)
Posted by Norris McDonald at 9:24 AM