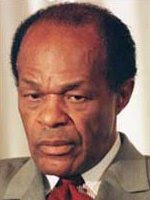 Former Washington, DC mayor and current council member Marion Barry is in Nantong, China serving as the keynote speaker at the China Association of Mayors (CAM) conference. Mr. Barry is in China for five days. The CAM promotes the development of Chinese cities by sponsoring studies and networking among its membership, which is made up of mayors and vice mayors in China. When Mr. Barry was mayor he signed a sister city agreement between the Washington, DC and Beijing, which led to the construction of a friendship arch in Chinatown.
Posted by Norris McDonald at 5:35 PM